The full story of Sarah Baartman and scientific racism

Sarah (Saartjie) Baartman was a young South African woman whose story is now seen as the pathological obsession with näked black bodies in visual culture. The fascination about her physique became the platform upon which scientific racism was built.

Hendrik Cesars and Alexander Dunlop brought Baartman to London in 1810. The group lived together in Duke Street, St. James, one of the most expensive parts of London. 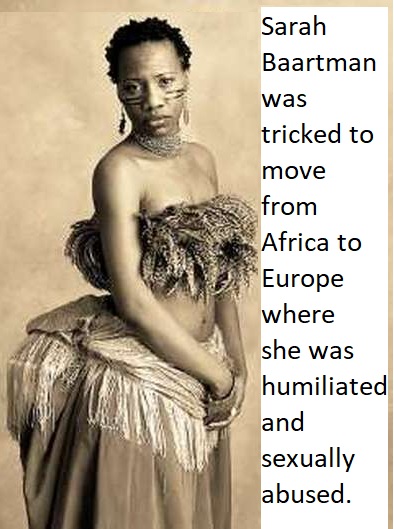 She agreed to move to Europe after Cesars, a ship’s doctor told her that she could earn a fortune and become very rich just by allowing foreigners to look at her body.

Sarah Baartman was tricked to move from Africa to Europe where she was humiliated and sexüally abused. She was labeled the “Hottentot Venus” as her body was displayed sexüally on stage.

“Hottentot” was the name for the Khoi people in South Africa and Baartman was a Khoisan woman.

“Venus” is sometimes used to designate representations of the female body in arts and cultural anthropology.

Baartman was exhibited for her curvaceous steatopygic body type which is very uncommon in Western Europe.

They exhibited Baartman in the Egyptian Hall of Piccadilly Circus on 24 November 1810 in an attempt to make money because of Londoners’ lack of familiarity with Africans and because of Baartman’s pejoratively perceived large büttocks.

When her exhibition in London met with criticism after the passing of the 1807 Slave Trade Act, which abolished the slave trade, she was then taken by a man called Henry Taylor to France around September 1814.

Taylor sold her to an animal trainer who then continued to exhibit her under more pressured conditions for almost 2 years at the Palais Royal.

Apart from the fact that she was paraded (with only her private pärt covered) across the country in a cage like an animal, she was forced to sleep with different men. Hence it is widely believed that she died of STD at the early age of 26.

Not only was her shape perceived as a curiosity at that time, but it became a subject of scientific interest.

Some unknown scientists got interested in her and they paid her owner to get her body examined in what is now known as “scientific racism” because the scientists were allowed to regularly completely examine her body ‘inside out.’

The supposed scientists who were so anxious to discover some abnormalities about her private pärts met with disappointment.

After discovering that she was just a normal human being with a bigger bütt, the so-called unidentified racist scientists still came up with a derogatory conclusion that Baartman was a link between human and animal.

Baartman’s story is often regarded as the epitome of racist colonial exploitation, and the commodification of the dehumanization of black people.

European objectification of the big backside which is often associated with African women has now taken a different turn because curvaceous bodies are increasingly lauded in popular culture and mass media all over the world.

In recent years, some black women have found her story to be a source of empowerment because most women (especially European women) have resorted to undergoing surgical operations to enlarge their bütts.

Baartman was a symbol of women and their bodies being treated as objects. She was used for freak shows due to her big backside, and even after she died, her dead body was used for scientific observations.

Her remains were mutilated, and parts of her body were used for exhibition. They were displayed in a museum in Paris.

None of the money made from the exhibition was given to her. She died pennilessly in 1816 at the age of 26.

White-minority rule ended in South Africa in 1994 with the election of Nelson Mandela as the first black president.

This request was delayed but later yielded to after eight years. The remains of Sarah Baartman were finally returned to South Africa by the French government. She was finally laid to Rest In Peace on August 9, 2002.

Baartman was buried and hailed as an icon for women who encountered and those who are still facing racial and séxüal abuse. Her grave is now a National Heritage Site.