Normally, it is very rare to see a father and a daughter or son and mother come forward to admit and speak out about their incestuous relationship. 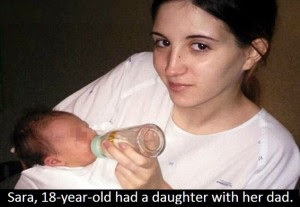 Nowadays, times have changed and strange things have started happening.

A father and his teenage daughter in Spain have revealed they are in an incestuous relationship after authorities took their newborn baby into care.

The 36-year-old father who constantly made love with his teenage daughter was only named Cris.

Both Cris and the 18-year-old daughter known as Sara, from Mallorca, insist they are in a loving relationship and should be allowed to bring up the girl, who is also the man’s granddaughter. This sounds so funny!

Although, lovemaking between family members is not allowed in many countries and is even punishable in some countries, it is however not against the law in Spain as long as it is between two consenting grown-up people.

1. Should incest be legalized?
2. Why do some parents make love with their own children?

Why Monica Lewinsky scandal is back in the news

Another infamous scandal is back in the news. Let’s get it clear again. Ex-President Bill Clinton had an affair with Monica Lewinsky, who was then the white house intern. Clinton was impeached but he narrowly survived the impeachment, and he was not removed from office.

The TV network HLN announced it would be revisiting the investigation in a two-part special about what really happened, and it made mention of the Monica Lewinsky scandal.

This did not sit well with Lewinsky, who took to Twitter to suggest a better title for the new show.

Lewinsky decided to cross out the Monica Lewinsky scandal line and replaced it with “The Clinton impeachment or the Starr investigation. She added the caption “fixed it for you. you’re welcome.”

End Of News Summary
← Back to World News Page


COMMENTS are disabled on our summarized news. See ARTICLES with comments enabled.

Free advert for everybody.
COMMENTS

Comments on “How to apply for the free money“

Comments on “What others are saying about us“