Who is to blame for the situation in Afghanistan?

TRUMP OR BIDEN? – Who is to blame for the situation in Afghanistan?

Former U.S President Trump said that Biden should “resign in disgrace” due to the situation in Afghanistan. However, he could not give reasons for his statement. 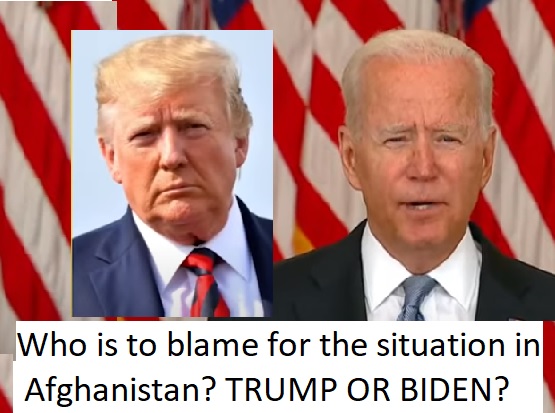 Trump and Biden (left to right)

Initially, Trump said: “Getting out of Afghanistan is a wonderful and positive thing to do. I planned to withdraw on May 1, and we should keep as close to that schedule as possible.”

Surprisingly, Trump and other Republicans are now blaming President Biden for withdrawing American troops from Afghanistan.

President Joe Biden explained that he followed through on the deal made by Trump to withdraw the U.S troops from Afghanistan. According to Biden:

“When I came into office I inherited a deal that President Trump had negotiated with the Taliban. The choice I had to make as your president was either to follow through on that agreement or be prepared to go back to fighting the Taliban in the middle of the spring fighting season.“

“There was only the cold reality of either following through on the agreement to withdraw our forces or escalating the conflict and sending thousands more American troops into combat in Afghanistan, lurching into the third decade of conflict.”

Without involving the Afghan government in the negotiations, the Trump administration struck a deal for ‘Bringing Peace to Afghanistan’ with the Taliban. The deal was signed in Doha, Qatar on Feb. 29, 2020.

In the deal, the U.S. pledged to facilitate the release of thousands of Taliban prisoners and withdraw its forces by May 1, 2021 in exchange for a ceasefire with American and allied forces and the severing of ties with terrorist groups.

Taliban assured the U.S that they would not allow Afghanistan to be used as a base for attacking other countries, as it was in the years before 9/11. That assurance was part of a 2020 peace deal reached between the Taliban and the Trump administration that paved the way for the American withdrawal.

In his speech, Biden finally said: “I stand squarely behind my decision. After 20 years I’ve learned the hard way that there was never a good time to withdraw U.S. forces.”

QUESTION:In your opinion, who is to blame for the situation in Afghanistan? Trump or Biden?

15 thoughts on “Who is to blame for the situation in Afghanistan?”