If you are a Trump supporter, you may wish to skip this article now by clicking HERE, or continue reading and share your opinion with us through the comment section below the page.

In case you wonder why a huge crowd celebrated outside the White House after Joe Biden was declared the winner of the 2020 Presidential election, below are 10 reasons why ex-President Trump was a very bad President. 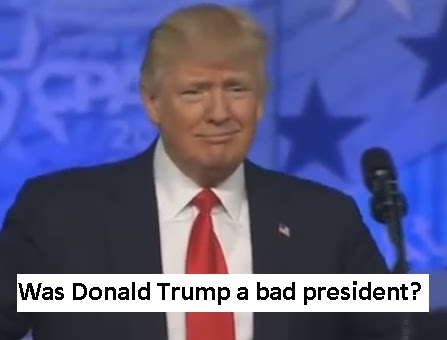 1. Trump made a lot of hate speeches in public and on social media, thereby promoting division and hate crimes. He was never interested in uniting the people. Instead, he stocked divisions over many of the country’s most sensitive issues, such as race, immigration, gun ownership, etc.

Trump is the first president in my lifetime who does not try to unite the American people. He sought to divide us than unite us. Trump will go down as one of the worst presidents in history because of his failure to unite the country.

2. He pulled out of the Paris Climate Change Accord which was made collectively by the world leaders because he does not believe in science, and the dangers posed by global warming. The Paris agreement was designed to keep the increase in global average temperature to well below 2 °C (3.6 °F) above pre-industrial levels because this would substantially reduce the risks and impacts of climate change.

3. He foolishly pulled out of Iran Nuclear Deal, which prohibited Iran from developing nuclear weapons, and he made no other better deal with them. Being a racist, he sought to erase anything or any progress made by fmr President Barack Obama.

4. He constantly fought to repeal Obama Care which provides insurance for over 20 million Americans, but he never came up with a better healthcare program to be used in replacing Obama Care. What a joke!

5. He does not regard poor people as hard-working people probably because he was born into a rich family and he reportedly inherited $30M from his father. Trump’s pushing tax reform through Congress and signing it into law does more favors to wealthy business people than working-class people. His efforts were designed to benefit the wealthy. His policies were never geared towards improving life for low-income people.

6. He kept lying to the American people and deceiving them by perpetuating the so-called Trump’s deceptive accusation method. Trump’s tweets were often incendiary and falsehood. Truth remains a fungible concept among his most ardent supporters. He brainwashed and blind-folding a lot of his supporters with his incessant lies. Thus, he was able to incite them to carry out the Capitol riot on January 6 2021.

7. His xenophobic and racist remarks make him unfit to be a President. imagine a President whose father originated from Germany, asking fellow Americans who are even members of Congress to go back to their “corrupt, broken and crime-infested countries.“

Trump told reporters in Germany: “My father is German,” “Right. Was German. And born in a very wonderful place in Germany and so I have a great feeling for Germany.” It’s hard to believe that a U.S President who originated from Germany, and his wife is from Slovenian, can be filled with so much hatred for immigrants that he can support the separation of children from their parents at the border. OMG! No wonder his defeat was celebrated throughout the world.

8. His abysmal handling of COVID-19 has led to the death of over 500,000 Americans. He downplayed COVID-19 and he is against wearing of masks. A measure that actually prevents the spread of the coronavirus. Trump said, ”China may have deliberately allowed the novel coronavirus to spread to the United States in retaliation for the tariffs” he placed on their goods. Trump even told WSJ that some people are wearing face masks to damage him politically. His bad handling of COVID-19 is one of the major problems President Joe Biden inherited from him.

9. In the last days of his presidency, without proof or evidence, he continuously lied to the American people and the whole world that the U.S presidential election was stolen from him. Meanwhile, he once said that he would accept the result of the presidential election “ONLY IF“ he wins. It means it was already evident from the beginning that he was not going to accept the election result. He went ahead to disgrace the U.S by not attending the inauguration ceremony.

10. Finally, Donald Trump can be said to be a very bad president with a bad legacy because he ruled for only 4 years, got impeached twice, and was banned from all major social media platforms.