The bipartisan infrastructure bill which narrowly passed with a 228-206 vote before being sent to President Joe Biden for signature, is meant to ‘build America back better’ as Biden would say. 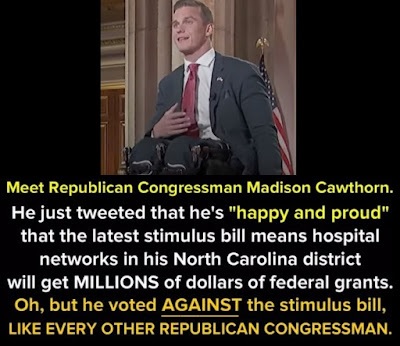 Thirteen Republicans supported the bill, and six Democrats voted against it. The bill would not have passed without the support of some Republicans.

President Biden hailed the passing of the bill as “a monumental step forward as a nation.”

Representative Pramila Jayapal, head of the Congressional Progressive Caucus said “I’ve spoken to the president a number of times today, and the president appreciates that we are working in good faith with our colleagues’ agreement.”

After The House passed the biggest U.S infrastructure package in decades, some of the Republicans who supported the bill started getting threats from Trump supporters.

The question here is if the infrastructure bill is meant for the betterment of Americans, why are majority of Republicans and Trump supporters against it?

In the past, all Republicans in Congress voted against the $1.9 trillion relief bill signed by President Joe Biden in March 2021.

But surprisingly, the same Republicans who voted against the bill later started celebrating Biden’s stimulus package and tried to take credit for the money they got from it. For example:

Sen. Roger Wicker (R-Miss.) celebrated a $28.6 billion grant for restaurants he had proposed that ultimately made it in the bill.

Rep. Madison Cawthorn (R-N.C.), tweeted that he was happy to announce more than $19 million in grants to health centers in his district that were allocated by the package.

Before the bill was passed, Cawthorn criticized it and described it as “nothing more than a Pelosi payoff.”

While celebrating the bill and trying to take credit for it in his tweet on 30 March, he wrote:

Happy to announce that NC-11 was awarded grants from the U.S. Department of Health & Human Services.

The six Democratic no-votes all are said to be part of the group often referred to as the squad + probably two new members. They are: